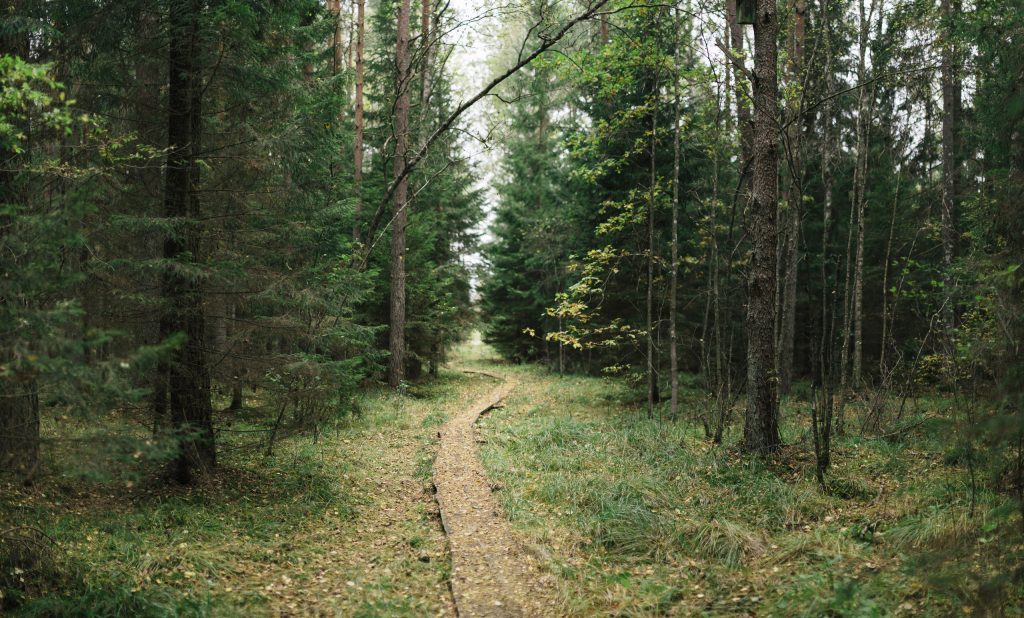 Plynoji - high swamp in Tauragė district, Mažonai and Žygaičiai elderships, Pagramantis regional park, Tyrelis forest. The swamp covers an area of ​​357 hectares. The length of it's nature trail is 1.6 kilometers - it leads to the middle of the swamp, from where the plateau opens. The Alanga river flows out of the swamp. Rare plants and animals abound here, and protected birds breed. According to legends, Plynoji appeared after the sinking of the manor. 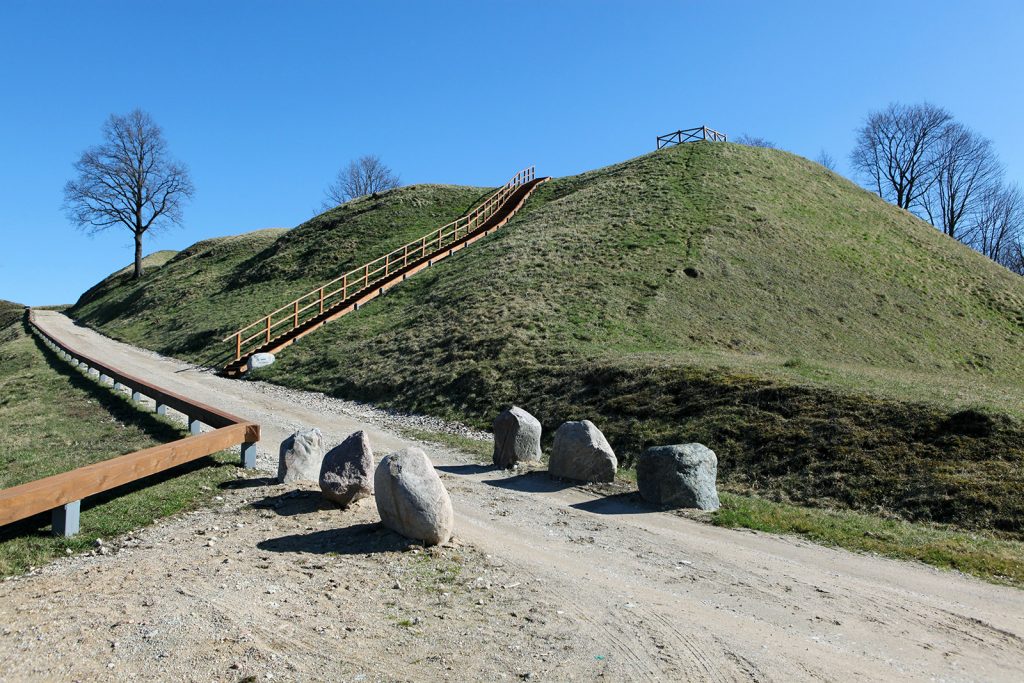 In the town of Pagramantis there is Akmena river, which bends a mound. This natural-archeological monument of Pagramantis Regional Park was arranged and prepared for visitors in 2014. The slopes of the mound are steep, more than 20 m. height. Although this mound has not been extensively studied so far, it is believed that it was inhabited in the 1st millennium or at the beginning of the 2nd millennium. Pagramantis mound is now part of the educational trail. It offers not only wonderful sunrises, but also the landscape of Pagramantis town, the outcrop of Pagramantis, the meadows and forests of the regional park, as well as the Akmena river, the Gramančia stream. There are paths, benches, an observation square and a fireplace on the mound. The St. John's Day festival takes place here every year, attracting guests from the surrounding towns and villages. 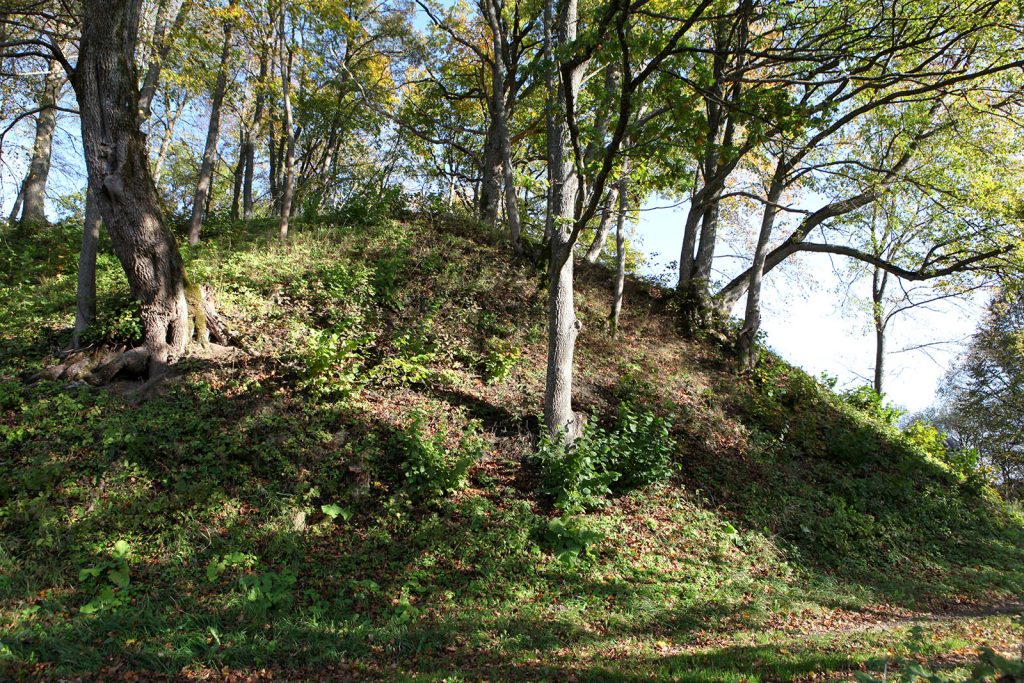 Matiškiai mound is located in Tauragė district, Mažonai eldership, in the south of Matiškiai village, on the right bank of the Jūra river. The mound site is triangular in a north-south direction 20 m long and 14 m wide at the northern end. To the north of the mound is a foothill settlement of 1.2 hectares. On the site of this mound until the 15th century. There was a wooden castle, which was last fortified by the Samogitian nobleman Mažonas in 1311 - 1314. The surviving legend about the mound states that there was a pit at the top of the former castle where a fire was burning, called a live fire. 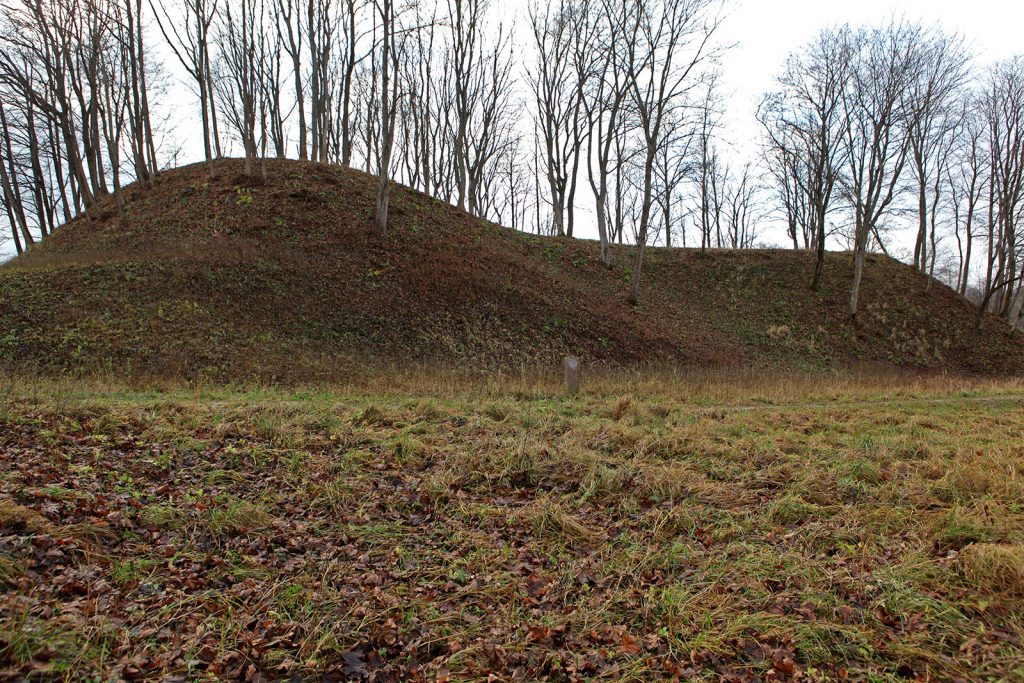 On the eastern edge of Skaudvilė is Nosaičiai mound. Located on a separate hill surrounded by wet meadows, dates back to the 1st millennium. The slopes are steep, 8 m high, territory 2.1 ha.

On the southern outskirts of Batakiai town. There is a mound at the intersection of the Ančia and Ūkis (Batakė) streams. Behind the embankment ditch, to the south is an ancient settlement. It is assumed that the Samogitian Aukaimis castle stood on the Batakiai mound. Aukaimis castle was a hiding place. It was guarded by the residents of the area in accordance with the established procedure. During the danger, everyone ran into the castle. The castle was important for defending the land of Karšuva, which entered the Samogitian defensive ring of castles. In 1345 near Aukaimis, the Crusaders defeated the Grand Duke of Lithuania Algirdas. After the introduction of Christianity in Lithuania, in 1387 the last Lithuanian "krivių krivaitis" (priest of the pagan faith), named Gintautas, chose Aukaimis as his last place of residence.

The Pagramantis outcrop is a cliff on the left bank of the Akmena, in an impressive loop of the river, in the northern part of the town of Pagramantis. The height of the outcrop is 29–31 m, and the length along the river is 203 m. The rock valley outcrops is the section of the Middle and Upper Ice Age (Pleistocene). It is like an open book of glacial years.

The geological outcrop is impressively high (approximately 24 meters) and long (approximately 160 meters). From the erosion-exposed outcrop, trees are constantly fall, and the exposed layers tell a history of about 200 thousand years. 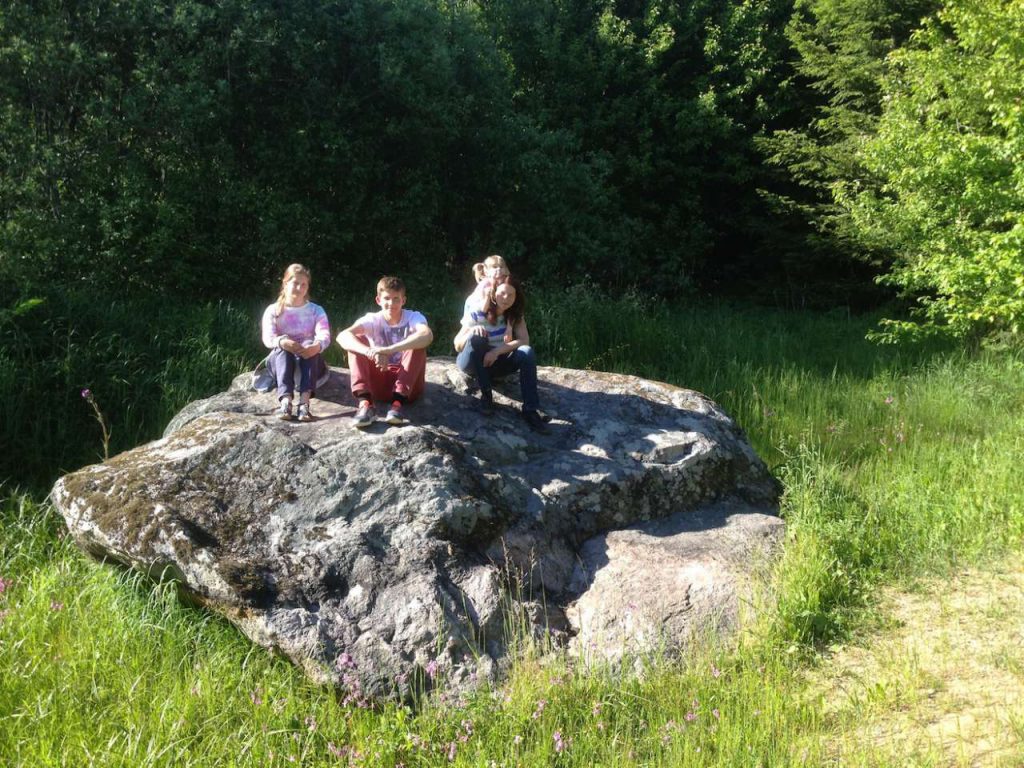 The boulder “Giant”, also called Tamošaičiai stone, is located in Pagramantis Regional Park, Tamošaičiai village; On the left bank of the Kernušupis stream. The boulder is oblong, flat, rising above the ground about 1.5 m. Its length is about 5 m, width is about 3.5 - 4 m. A large part of the boulder is hidden underground. At the top there is a hallow about 3 cm deep, similar to a large foot with a length of over 60 cm and a width of 20-25- cm. It could have been an insert of another rock, later broken and spilled. The boulder was brought from Scandinavia, but the exact location cannot be determined without special research. It looks like it could have been northwest Sweden or Finland. 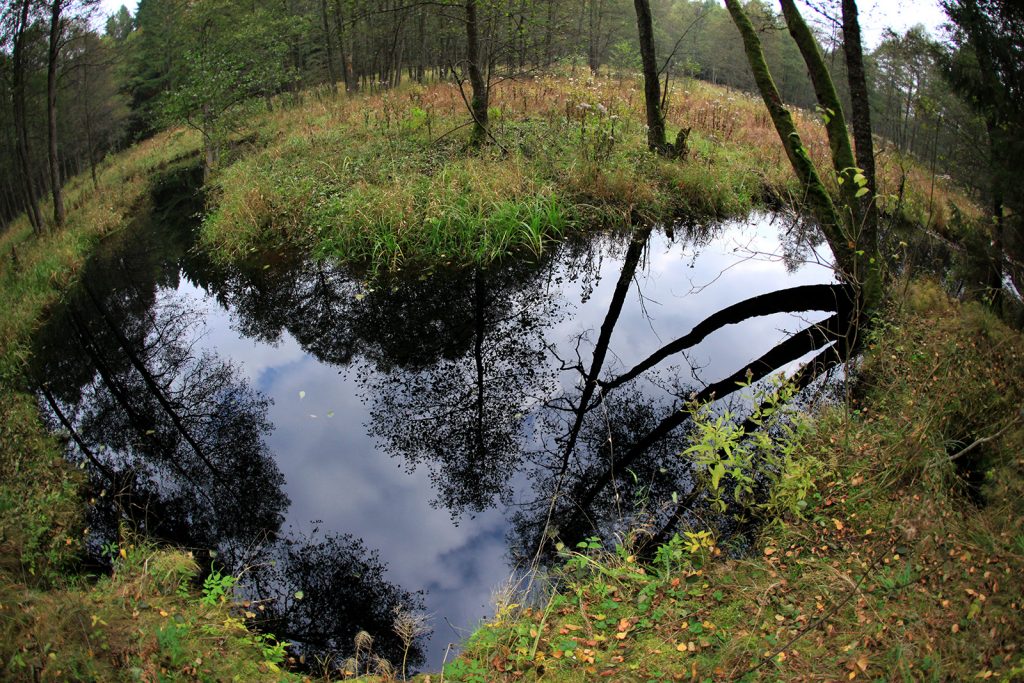 On the southern outskirts of Tauragė county, about 15 km southeast of the city of Tauragė, there is a wild, almost untouched natural world of civilization. The Viešvilė Reserve was established in order to preserve the natural ecosystem of the Viešvilė basin with the Artoji, Gličius swamps and the surrounding Karšuva forests in the Karšuva lowland, as well as its unique flora and fauna. It is forbidden to visit the reserve without a permit or without an accompanying employee of the reserve directorate.

WHERE TO FIND US 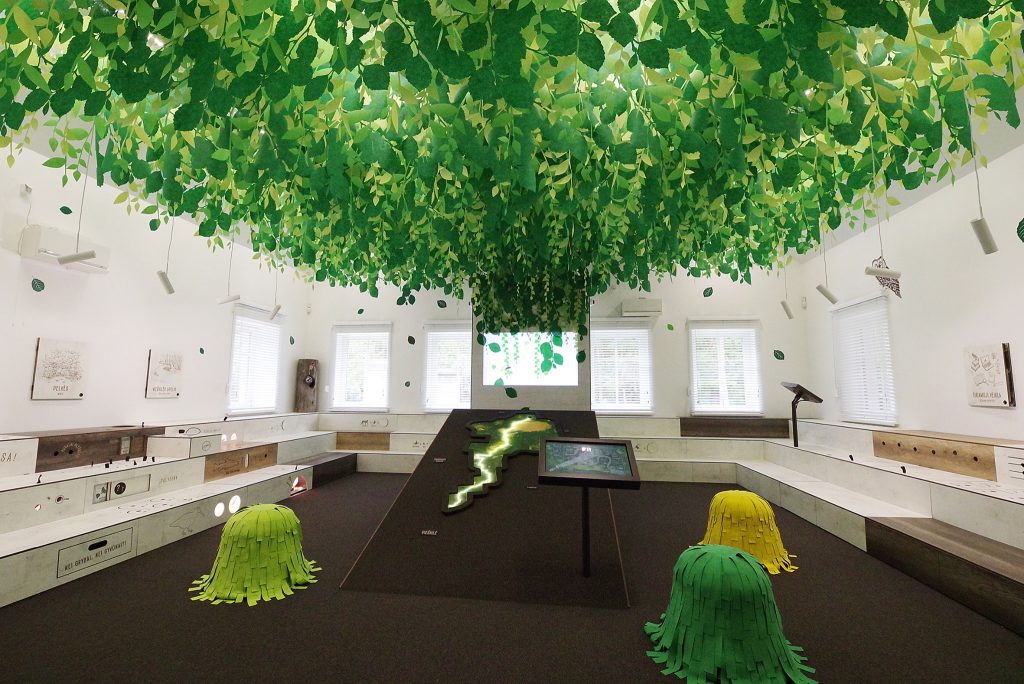 In 2019 May a new exposition of the Viešvilė National Nature Reserve Visitor Center was opened. It tries to answer the most frequently asked question - how important is the nature of the reserve and what is protected here. The exposition is adapted to various age groups of visitors and each of them will find interesting information. There are also games, tasks that will test your knowledge. The little guest of the reserve will feel like a king on the owl throne, where all the owls living in Lithuania are carved. The main exposition of Viešvilė reserve is installed in… stairs. Stairs are both seating and information carriers. The walls contain laconic textual and visual information about the values ​​of the reserve, and the furniture stairs playfully conceal information about plants and animals. The Viešvilė Reserve is the only capercaillie breeding ground in Lithuania. Thus, in the observation rooms of the capercaillies of the exposition, not only these timid animals are observed, but also silence is learned. On the screen and elsewhere in certain places it will be possible to watch footage about nature and the activities carried out by the directorate. Only those who enter the exhibition premises will be greeted by the sounds of nature, one can hear one or another bird singing.

WHERE TO FIND US

Lakštingalų (nightingale) Valley is a recreational area of ​​Pagramantis Regional Park, established in the loop of the Akmena river. This is where the Akmena river cognitive trail begins and ends. The valley has a pond with an island, a playground with swings, a summerhouse and a small stage. Various cultural events of Tauragė and Šilalė districts take place in the Lakštingalų valley every year. The beautiful landscape and well-developed recreational structure attract guests and vacationers from all over Lithuania. 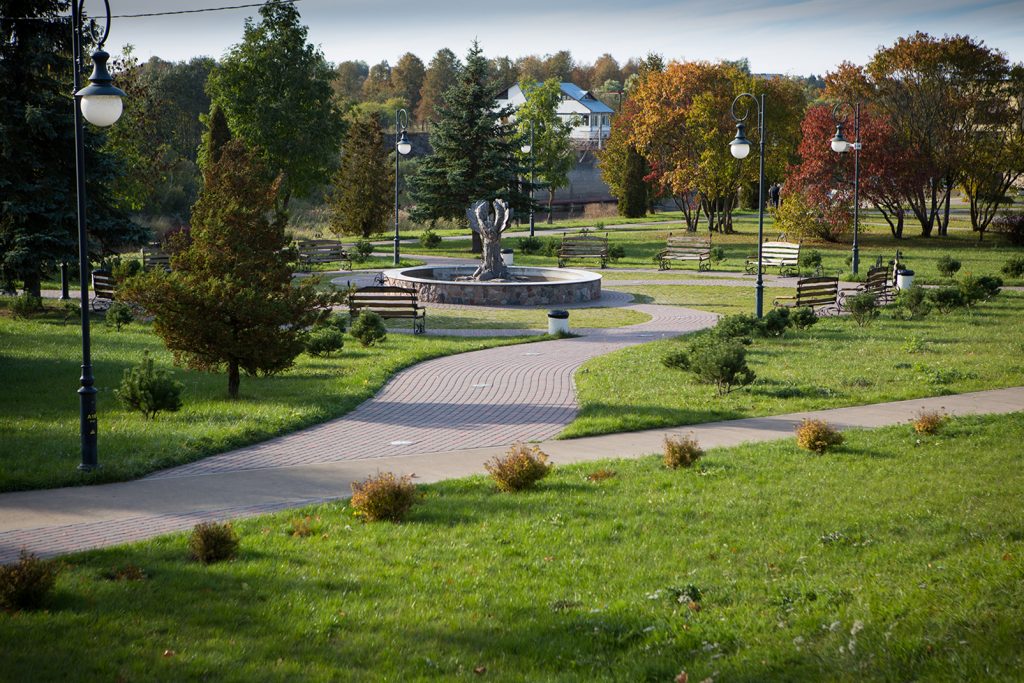 The park is based on the symbols of the old Baltic culture. Walking around the park, you can easily find many symbols - Sun, Moon, Infinity or harmony, World tree, Snake etc. Original signs of the ancient Lithuanian Zodiac were discovered on an ancient ceremony found in the basement of the Grodno church of the 16th century. In the park, everyone can get to know they zodiac sign based on Baltic mythology, find out what our ancestors can tell you through these signs.

MONUMENT FOR CONVENTION OF TAURAGĖ 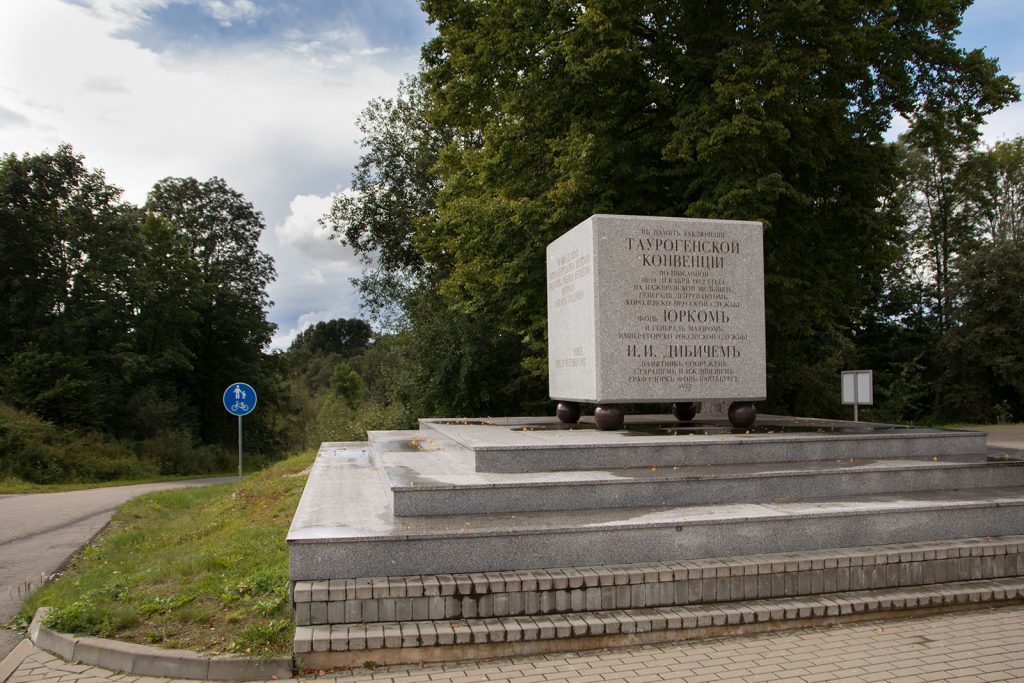 6 km. from Tauragė towards Tilžė (Sovetsk), in Požerūnai village, turning the old road to the southeast, we approach the Ežeruona stream. Next to the dilapidated bridge over the stream stands a concrete monument dating back to 1812. a two-generals contract. On December 30, 1812 near Tauragė, at the Požerūnai mill, a convention was signed between Napoleon's ally, Lieutenant General H. York, Commander of the Prussian Army Corps, and Major General I. Dibič of the Russian Army. This convention made Tauragė famous in Europe. To commemorate the 100th anniversary of the signing of the Convention, 1912. a granite monument was built. 1944 in the fall, Soviet soldiers blew up the monument. 1976-1977 another concrete monument was created in Požerūnai village on the shore of Ežeruona, next to the place where the witness of the historical event stood.

Lithuanian partisans killed in 1944-1955 were buried in the territory of Skaudvilė NKVD yard. In 1990-1991, a chapel pillar was built and consecrated next to the former NKVD building, and a memorial plaque was unveiled. A monument was installed in the courtyard of the NKVD headquarters to commemorate the 43 partisans of Kęstutis district and their supporters who were tortured in 1944-1955, symbolic crosses with the names of the dead.

The cemetery is maintained, but many graves and tombstones were destroyed during the Soviet era. Old tombstones can still be found in Hebrew.

Many Jews lived in Batakiai, therefore in the 19th century. A Jewish cemetery was established at the beginning of the 19th century and jews were buried there until 1941.

In Tauragė there is a cemetery of the victims of the First World War with a monument. 64 Russian and 121 German soldiers are buried nearby. In 1988 area was renewed, and in 1991 a cross and an information board in Lithuanian and German languages were installed.

On September 6, 1941, the head of the county police, Vladimiras Mylimas, issued instructions for the isolation of Jews and the loss of civil rights. September 12 the Germans surrounded the forest, the Tauragė - Šilalė highway and the bridge over the Šunija stream. From morning to noon, people were transported by car to the edge of the Antšunija rural forest - here women and children were shot and buried in two pits. Local fascist aides also took part in the bloody genocide. About 3,000 Jews were shot in the village of Antšunija. 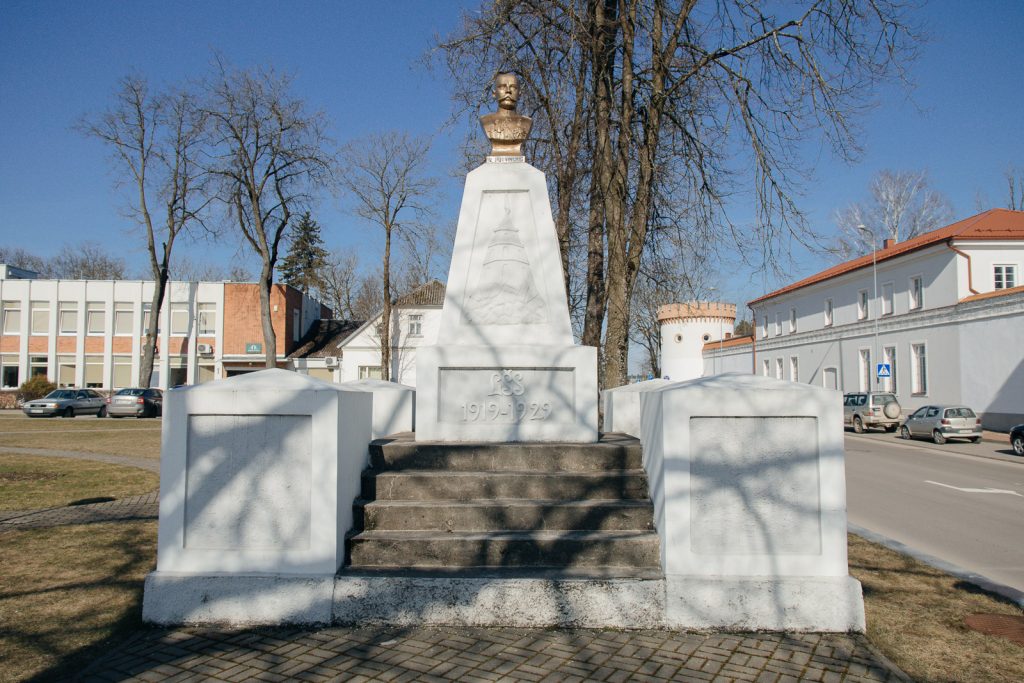 The memory of Vladas Putvinskis was honored in Tauragė - between the Tauragė Castle and the Palace of Culture, the former Riflemen's House. In 1930 a monument was built, which was demolished, destroyed and buried by Soviet soldiers in the post-war years. During the Reform Movement (1988-1990), the monument was restored. 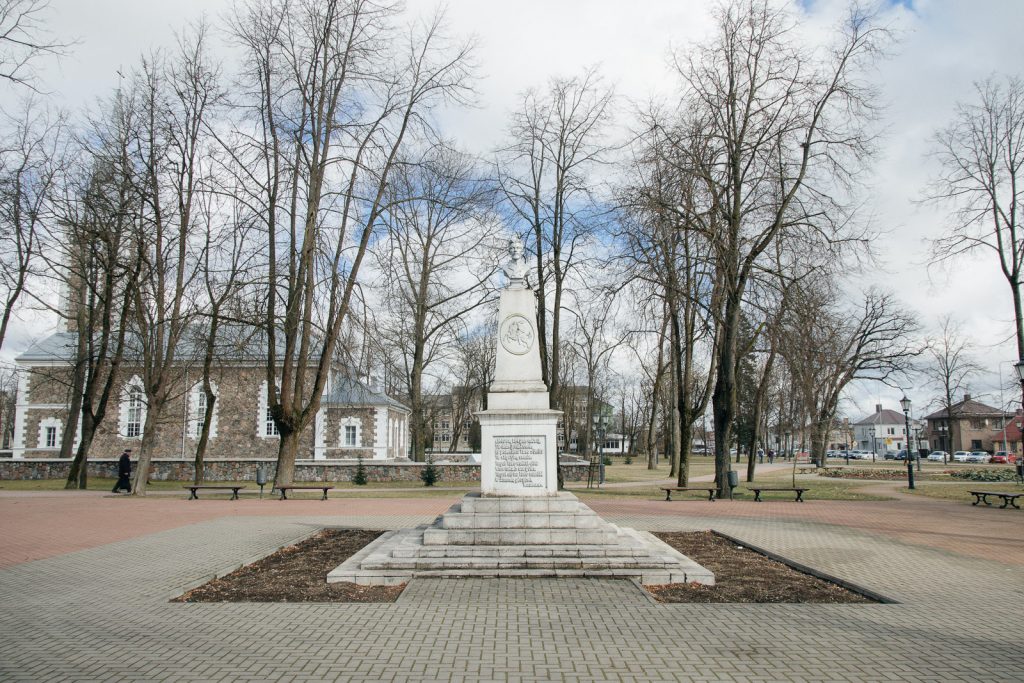 The monument to V. Kudirka was built in 1928. at the headquarters of Tauragė district. About 1968 the monument was demolished, the bust (sculptor J. Zikaras) was saved by the head of the culture department J. Šimkus. Monument was rebuilt in 1990 on the initiative of folk artist A. Bagdonas